Books, Music, Travel… The three things that define my life. As the daughter of a wildlife photographer, being in the wilds is another thing that I cannot do without. ‘Of the gladdest moments in life, methinks is the departure upon a distant journey into unknown lands. Shaking off with one mighty effort the fetters of habit, the leaden weight of routine, the cloak of many cares and the slavery of home, man feels once more happy.’

It has always been my dream to visit Druk-Yul, the land where people’s happiness, measured by the Gross National Happiness (GNH index), is given much more importance than the nation’s economic development. One of the only countries in the world where the people adore their king and queen, and fought against the introduction of democracy that was initiated by the King himself – Bhutan, the Land of Dragons. The fifth king, who currently sits on the throne, is still the highest authority in the country, while a democratically elected government is headed by a prime minister.

The only airlines that connects this country situated bang in the middle of the Himalayas to other parts of the world is Druk-Air or Dragon-Air. The minute I set my eyes upon its office in one of the airports in India, I put down ‘Flying in Druk-Air’ on the top of my bucket list. Much to the amusement of my parents, I was more excited to fly by Druk-Air than visit the Shangri-La itself; but it turned out to be worth its position on my bucket list. It is said that only a handful of pilots around the world are trained to land air-crafts on the runway that is situated in a valley surrounded by cascading green mountains. It was breath taking the way the pilot manoeuvred between the mountains before landing smoothly on the runway in the very pretty but compact Paro International airport. A huge banner of the King and the Queen welcomed us as we came out of the plane and breathed in our first lungful of the clean Himalayan air.

We were greeted by our guide and driver, Jamptsho, who was to be with us our entire trip. He soon made us feel at home with his little jokes and answered all our plebeian questions about the country as we drove straight to the country’s capital, Thimpu, where we were to stay for the next two days to do some local sight-seeing. As we drove through the only four-lane road in the country that serves as the backbone of the capital city, we saw that all the houses were built in the traditional style. Apartments and high rise buildings, though built in the modern manner, had traditional Bhutanese roofs and windows according to the prescribed standards. Even the Benz showroom was built in the traditional Bhutanese style! We also noticed that all the people on the road wore the traditional Bhutanese attire- gho for the men, and kira for the women. Hardly a handful of people were dressed in casuals. 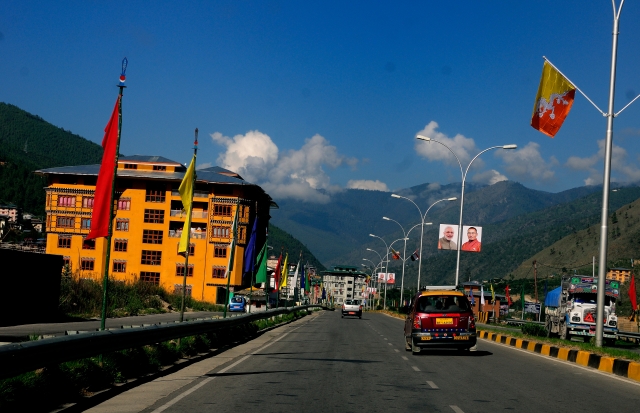 Once we checked in, we immediately left to sample the local Bhutanese cuisine that is known for its spiciness, after which we visited the local arts museum, which was under the patronage of the fourth queen. Halfway through the pristine hallway, I began to feel giddy and nauseous and we were forced retire to the room. I was down with food poisoning, courtesy of the sandwich that I had on the domestic flight in India! This was the last thing that I wanted when on foreign soil.

Feeling a tad better the next day, I decided to muster all my strength and stick to the itinerary. We visited the huge Buddha statue that is strategically positioned on top of a hill, such that it is visible from every corner of the capital city. It was still under construction, but the magnitude of the size was truly astounding. The sun was beating down hard and I was feeling close to blacking out any moment, when we decided to visit the Taikin zoo. The Taikin, which is a cross between a cow and a goat, is the national animal of Bhutan, and there was no way that I was going to miss seeing that. We went through the huge iron gate, and were greeted by herds of the weird creature that were grazing inside a huge enclosure. And that was all that I could take. 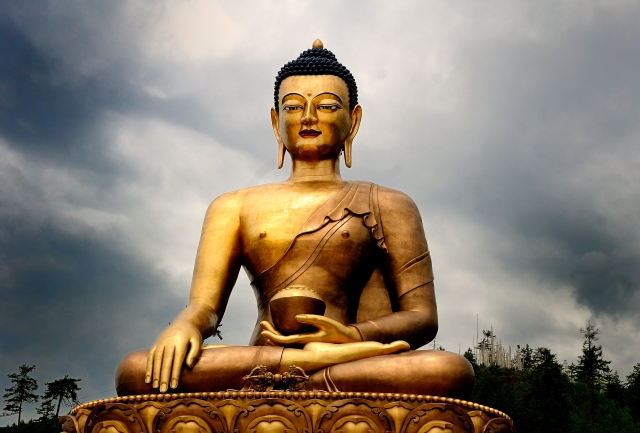 We drove back to the room, where I fell in an exhausted heap on the bed, hardly able to lift my finger, shedding bitter tears and cursing my luck. It was not the sights in Thimpu that I was worried about missing; it was the thought of not being able to visit what is considered to be a Mecca for the Buddhists around the world, which was scheduled for the last day of our stay in the country, that made me miserable- the thought of not being able to visit the Tiger’s Nest Monastery. But the Providence had a different plan in mind…

*Kuzuzangpola is a salutary greeting in Bhutanese language.