Books, Music, Travel… The three things that define my life. As the daughter of a wildlife photographer, being in the wilds is another thing that I cannot do without. ‘Of the gladdest moments in life, methinks is the departure upon a distant journey into unknown lands. Shaking off with one mighty effort the fetters of habit, the leaden weight of routine, the cloak of many cares and the slavery of home, man feels once more happy.’

Our last day in the city of Leh dawned bright and gay; or rather, too bright and gay for our liking, as we had to sit under the scorching sun the entire day. It was the annual, auspicious day of the Hemis festival, when the monks of the Hemis monastery dance their religious “cham dance” or the mask dance, to celebrate the victory of good over evil.

Driving up very early to the monastery, we climbed a very steep pathway, as they stopped all the vehicles a long way down for security reasons. Reaching the monastery with wobbly legs, completely out of breath and longing for a little rest, we struggled up another flight of stairs to reach the courtyard where all the action was to take place. Finding a good place right in the front, we placed our bags there, and went to peep in at the offerings and prayers going on inside the sanctum sanctorum. It was just around eight in the morning, and the sun was already high up in the sky, curdling and literally frying our skin. To top it all, no amount of sun block seemed to work.

In just about an hour, the courtyard was overflowing with people from various corners of the world- Japanese, British, French, Dutch, Americans and of course, the pious Buddhists from India and China. The monks came out into the courtyard, after just a little delay, adorning colourful masks, and bright sequined robes that sparkled in the sun.

Staring with the dance that offered prayers to the Almighty, there were a series of dances- slow and rhythmic, the monks balancing their way through the slow beats of the drums and the cymbals. The dances, all depicting the triumph of good over evil, were based on various incidents in the Buddhist mythology. There was a dance depicting various forms of Buddha, and even a clown dance in between to lighten the mood! As the sun rose higher, the fervour with which the monks danced increased, and our skin steadily became sorer. The high altitude definitely did not make things easier- the combination of the extreme heat, the stuffy courtyard and the thin atmosphere, resulted in a blinding headache sometime towards the end.

Just when I thought that I wouldn’t be able take it anymore, the festival came to an end, and I breathed a huge sigh of relief. We pushed our way through the crowd, and began our long walk down to the parking lot, cursing the sun all the way down. We drove back to Leh, stopping to have lunch (at 5pm!), at a very small and dingy place that served very homely and delicious food. Of all the places that I had eaten in on this trip, I guess this place is my personal favourite! Once in the hotel, we thankfully sank into our beds and went to sleep instantly, exhausted to the bones and not realising that that was actually our last night in the city that had given us so many wonderful memories. 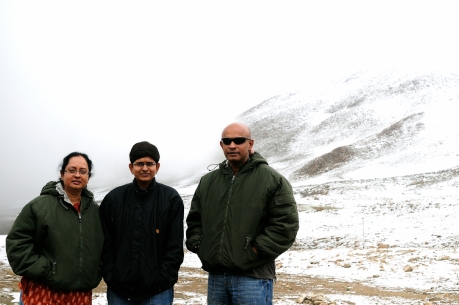 My mom, dad and I

We were up at dawn the next day to catch our flight to Delhi, from the highest airport in the world!! (gosh, to think of the number of ‘the highest something in the world’ that I have seen in just eight days, in the same place!) We kept our fingers crossed, as two flights had been called off at the last moment in the last few days due to bad weather. But thankfully, it was a gloriously clear day, which offered us breathtaking views from the flight. I was glued to the window, trying to drink in all that I could of the last sight of the Himalayas.

As I watched the receding snow-capped mountain peaks that had become an integral part of the daily landscape in the last few days, I thought of all that the place had given me- the joy, the disappointments, the fears, the memories that will last for life, and of course, the roasted, dry skin and black lips.  And I knew, deep down, that this place will always mean something special to me from that moment on.